(My Bestest Friend, Love of My Life, and Inspiration in All Things I Do) 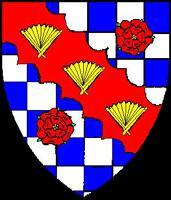 
I, and my lord husband, Sir John, own and live at Wolfstan Manor located along the River Itchen just north of in the year 1482. Our major source of supplies and money is in the wool industry. We have our wool transported down the river to the English for trade and sell. With being a major seaport, I am privileged to have access to many styles of clothing, cloth, spices, and news of travels throughout the world. We are currently experiencing the War of the Roses between the House of Lancaster and the House of York.  Edward IV with the House of York is on the throne. Click on the map below for 15th Century Maps (large file).

When I am not out enjoying watching John practice his warrior skills, I like to spend time crafting and painting silk banners for friends and for the Kingdom.  I also enjoy designing and constructing clothing for myself and my family with the cloth I purchase at the many ports along the River Itchen.   Other areas of interest for me are combat archery, cooking, running or helping with Lists, water bearing, working gate, providing roving security (formerly constabulary) and generally volunteering where needed.  I currently hold the Kingdom Office of Waiver Secretary.  I have served on 4 Royal Retinues,  “mentoring” those members of retinue who have less experience in serving the Crown.

My personal device consists of 3 gold fans on a red bend and two red double roses, all on a blue and silver background. It is emblazoned as: Checky azure and argent, on a bend engrailed between two double roses gules three fans palewise Or (see below).

Our household badge is a combination of John’s howling wolf and my double rose (see below). 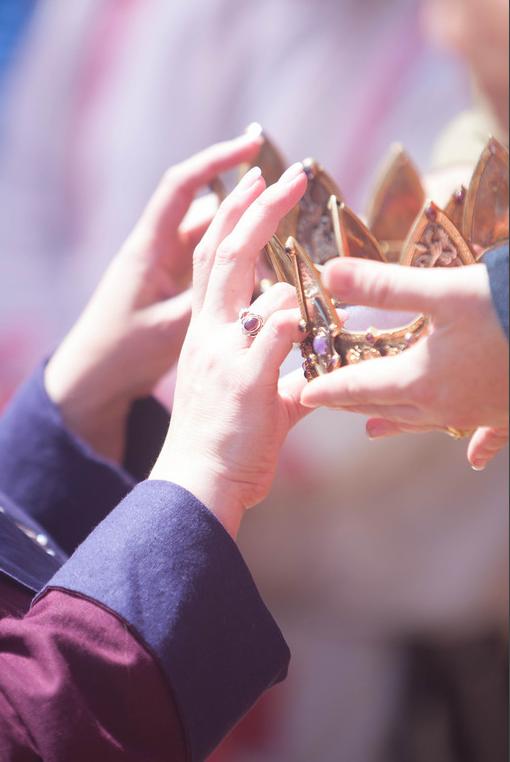