My lady, Alyna Wolfstan, and I have two children, Christine Wolfstan and Isaac Wolfstan. We have a manor named Wolfstan Manor which is located along the just north of in the year of 1482. Our major source of supplies and money is in the wool industry. We would transport our wool down the to the English for trade and sell. The waterways were prone to attack, but fortunately for us I have a brother that is also a pirate. He is the Dread Pirate James Wolfstan and he would protect our shipments along the river. With being a major seaport, this allowed for the many styles of clothing ideas, cloth to make the clothing, spices, and knowledge of travels throughout the the known world. In our area, we were involved with the War of the Roses. This was a war between the House of Lancaster (Henry VI with the Red Rose as the symbol) and the House of York (Edward IV with the White Rose as the symbol). The current person on the throne is Edward IV with the House of York.  Click on the map below for 15th Century Maps (large file). 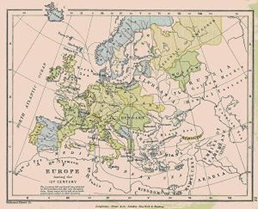 As a warrior, my main style of fighting is with heavy weapons, but I have had some experience with archery and thrown weapons. I have the following weapons abilites: longbow, throwing axes, throwing spears, fighting with spears, great axes, great swords, glaives, hand axes, maces, broadswords with shields both round, heater, and rectangle, dueling shields, as well as flourentine. My personal device is a silver wolf head that is erased and howling to the left side of the shield on top of a gold bend that is embattled/counterembattled on top of a shield that is halved vertically with blue on the right and red on the left. It is emblazoned as: per pale azure and gules, a bend embattled-counterembattled or, overall a wolf’s head erased contourney ouluant argent. (two renditions of this are below)

Our household badge is my howling wolf wearing an english tudor (double) rose about his neck on a fieldless background (fieldless devices can then be placed on any color background). This badge is a combination from both Alyna and my personal devices (see below).

the Inspiration for John's name and device

Link to a page created for my Knight

Jun 1996          Earl Strider and Countess Kathryn were taking a break from the SCA and offered to foster the Squires out at that point.

I asked to continue wearing my belt as his squire.

events per year) for the next 4 years

Jan 2008          Membership within the newly formed tournament company, Company of the Shattered Lance.

Elected as the quartermaster of the Company.

Story of Miles and the Knight